The KLM Delft blue house No. 99 is sustainable

Airlines usually offer you the sale of some products and services on your flight. The case of KLM Royal Dutch Airlines, a subsidiary of the company Air France-KLM, is different, taking in account that several decades they have given a tender present to all the World Business Class passengers (business class) that you will also love.

Do you want to know what it is? Keep reading to find out…

The story of the gift…

In the 1950s, the airline began giving Dutch business class passengers typical Dutch houses. These charming pieces are replicas of existing Dutch houses and are made of blue ceramic.

They are also known as Delft Blue Houses, this name is attributed to them because of a ceramic technique called Blue Delft, a type of pottery native to the Netherlands.

Initially, the law prohibited airlines from giving gifts to their passengers. Due to this problem KLM filled the houses with gin as if they were a container for placing drinks, simulating a glass. The distillery called Rynbend was the first to fill these houses with liquor. 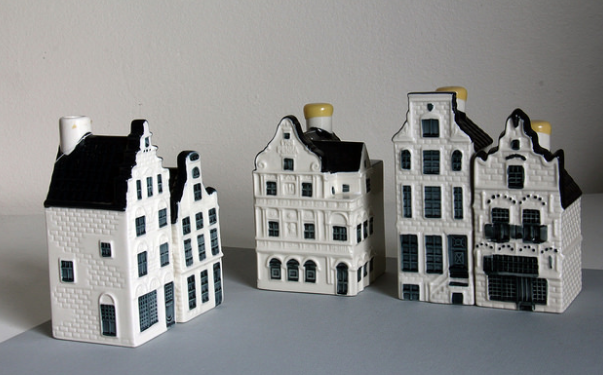 Another curious fact about these houses is that due to the restrictions on flights from the Middle East, KLM opted to deliver little houses in the shape of an ashtray, which when leaving the cigarette, the smoke gets out of the chimney. 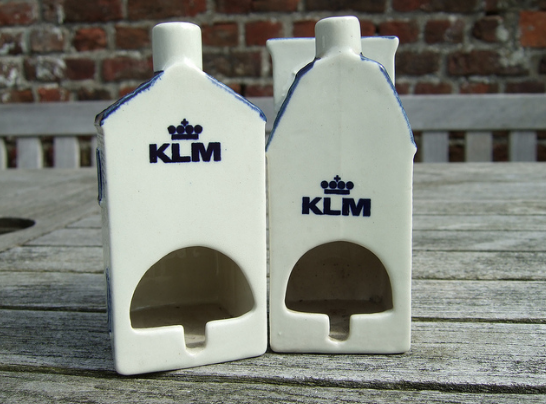 The houses measure 5.5 cm x 10 cm, they are white and blue, and have represented Dutch buildings with historical and architectural value.

We know that Holland has history, that is why the most desired houses among collectors are the number 48 of the renowned Baroque painter Rembrandt, as well as; the house number 47 of Anne Frank, for being important tourist attractions in Amsterdam.

The company decided that this gift would be given to celebrate another year with the company. And every year, specifically every October 7, it launches a new miniature. That is why to date the airline continues to give them away.

Why is the house #99 sustainable?

To celebrate the 99th anniversary of the company, they decided to make a very responsible and unforgettable house for the collection.

With the story we told you above, we know that all the KLM miniature houses have left an important mark in history. This year, the company did not want to be left behind and the new member of these series of houses was presented a few days ago in Joure, Friesland.

They chose this province of Holland because there you can find the first Douew Egberts store, a company from the Netherlands that sells sustainable tea and coffee products. This place has the UTZ certification, which aims to promote sustainable agriculture, help farmers, workers and their families, so it helps to safeguard the world’s natural resources.

What is interesting is that apart from celebrating with this little house in miniature Douew Egberts coffee shop, KLM will join forces with this Dutch company, offering their coffee as of Sunday, October 28, 2018.

Each passenger of European and intercontinental flights and in the KLM VIP lounges on the Amsterdam-Schiphol Airport, can enjoy this sustainable coffee. In addition, KLM collaborators in the Netherlands will also be able to enjoy the drink.

The houses that now promote fair trade will be available in about few days in each KLM aircraft in the world.

What do you think? Wouldn’t it be cool to get this type of houses to flights from Mexico? Let us know what you think!