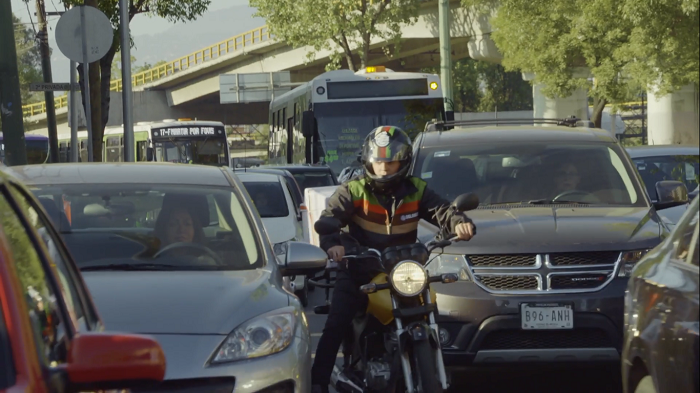 This campaign by Burger King is not only irresponsible, but also illegal.

Semovi condemns the commercial strategy for breaches of traffic regulations, while specialists agree that the brand has gone too far.

The burger chain Burger King, in Mexico, gave us something to talk about with its #LaTrafficWhopper campaign that takes your fast food order to your car door.

Targeted to drivers trapped in Mexico City traffic, it allows ordering food from Burger King through a mobile application with a system that works after analyzing the traffic flow and verifying that drivers will stay for a period of at least 30 minutes within a radius of 3 km from the restaurants of the brand.

It is estimated that every year Mexican drivers spend around 227 hours of their lives in transit.

Taking advantage of this situation, Burger King launched its initiative in April in Mexico City, which according to the TomTom Traffic Index is the city with the highest traffic congestion in the world.

«In the last two decades, technology has advanced at a dizzying pace. The internet and real-time data analysis are enabling products, services and functionalities that we only imagined in science fiction movies. But as we can imagine a utopian future, it is also possible to create a dystopian one» said Luis Martínez, marketing specialist, referring to this particular campaign.

According to him, the campaign that is also spreading with the hashtag #TheTrafficJamWhopper is completely irresponsible and even illegal.

«You don’t have to be genius to know that in order to deliver food in a few minutes, the motorcyclist will have to drive carefully between the lanes. Otherwise he could not advance in the traffic jam. This fact is already a clear violation of the traffic regulations in the city, not to mention that using the cell phone while driving is also a violation. Although the chain naively suggests that voice commands are used.»

Enrique Bledl Bernal, director of Reputation Institute, agreed in a comment for ExpokNews that eating while driving is a violation of traffic regulations and puts the integrity of the driver at risk.

One of these days someone may make a video of a car accident of «Lady Hamburger», who crashed because she was eating while driving, he said.

He explained that although it can be a great media campaign, it is also a clear example that the marketing areas of large companies, in this case Burger King, are detached from reality and from the communication departments, which, in case of an incident will have to come up to defend the campaign.

«This is just a fad, it will not change the traditional ways of selling hamburgers, although it is worth asking if Burger King is willing to put its reputation at risk for a passing fad. Unless you really want to compete directly with street vendors who are every day in the streets,» he said.

«However you look, it’s a campaign that effectively knows how to use technology… but it does so without social responsibility or legality, suggesting behaviors that endanger the lives of motorcyclists and the safety of drivers. Isn’t that brilliant?, pointed Luis with irony.

The restaurant uses real-time traffic data to detect the areas with the most traffic congestion. Then, it uses dynamic ads in apps like Waze, as well as spectacular digital ads to promote its hashtag #TheTrafficJamWhopper. The initiative seeks to extend to other cities, such as Sao Paulo, Los Angeles and Shanghai.

The official posture that the Ministry of Mobility in Mexico City (Semovi), granted to ExpokNews in relation to the issue was convincing: «Semovi is not in the least in accordance with this system of food sales, since it makes improper use of motorcycles on the roads, breaking the traffic regulations, putting at risk the integrity of the drivers and the motorcyclists themselves».

The initiative of the brand was mentioned on social media by Fernando Machado, Global Chief Marketing Officer of Burger King.

Bledl Bernal added that a brand can lose its reputation very easily and if insecurity is caused as road accidents by this style of trade, Burger King will have a hard time recovering its image.

It is obvious that «the brand did not perform a risk analysis, which in the end will be more counterproductive than the sale of hamburgers,» he said.

Official posture, but only on the marketing subject

When it comes to this campaign, ExpokNews tried various means to obtain a standpoint by the brand and find out if they conducted risk studies beyond marketing, but there was no additional response to the institutional information regarding the campaign.

Bruno Cardinali, Marketing Director of Burger King for Latin America and the Caribbean, said: “In Mexico, our delivery service is currently delivering an average of 7,000 orders per day to homes and offices. The #TheTrafficJamWhopper campaign has been key to spread our delivery service across the country and at the same time take over a moment of the day in which deliveries are naturally low for our restaurants, precisely because of the traffic.»

The company did not disclose information about the traffic problem it generates in the midst of cars, both because motorcycles and bicycles are dodging cars stuck in traffic or addressed the issue of insecurity for delivery drivers that this causes.

Apart from that, Mexico is the second nation ranked in obesity on the planet and with this type of initiatives, the consumption of «junk food» continues to be encouraged.

The brand estimates that this system increased orders by 63% in the first week of the campaign and noted a 44-fold increase of app downloads.

The campaign was developed by We Believers, the agency behind the edible six pack rings, designed for Saltwater Brewery.

Burger King obtains revenues at about $1,140 million worldwide, a figure that has grown in the last two years.

The company has a brand value of $5 thousand 116 million dollars. At the end of 2018, it had 50 restaurants owned by the company and 17,746 franchised restaurants worldwide.