Johnson & Johnson’s could end up being analyzed due to bad practices.

The first responsibility established by the Johnson & Johnson’s Credo is «with all those who use our products and services». This is established by the ethical positioning of the company that in recent weeks has been involved in a scandal for allegedly hiding for decades that its baby powder was contaminated with asbestos.

Asbestos is classified as a substance that causes cancer, according to various international health agencies such as the US Department of Health and Human Services and the International Office for Cancer Research.

In descending line, the Johnson & Johnson’s Credo – which is studied in universities as an exemplary case of ethical directive and corporate social responsibility (CSR) – establishes a commitment with its employees, later with the communities in which they operate and even with the «global community» and, finally, with its shareholders. 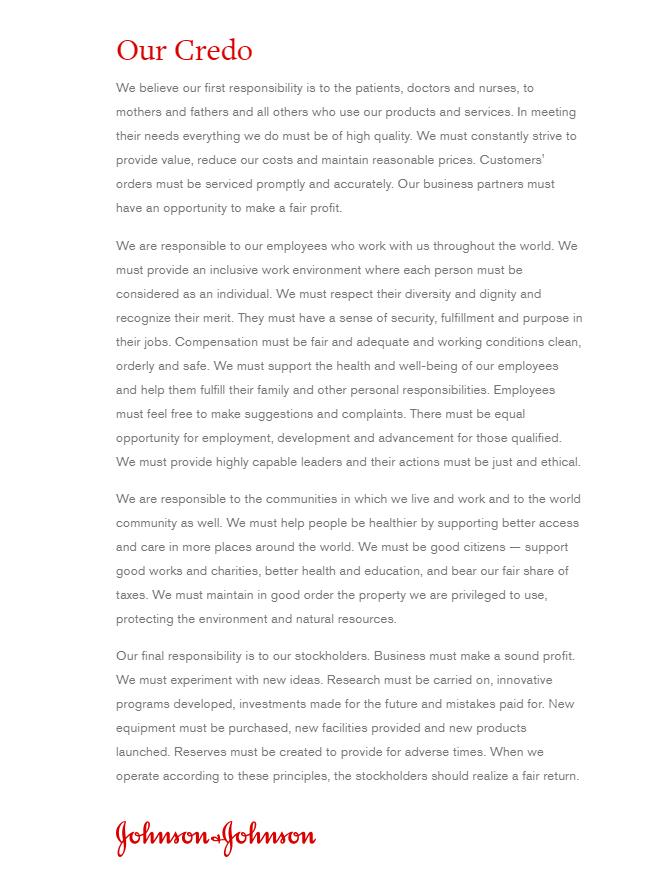 On December 14, the Reuters news agency revealed that Johnson & Johnson’s baby powder had asbestos for decades and that the company itself knew all along, doing nothing about it.

In response, the company denied that it had known of talcum powder contamination for decades and even called the story «absurd conspiracy theory.» Alex Gorsky, president and CEO of Johnson & Johnson’s, issued a message on December 17 in which he assured that the talc used is and has been since its inception the purest and safest on Earth.

The accusations against the company for the contamination of its baby talc powder are not new. In recent years, while the company claims that Johnson & Johnson’s CSR is stronger than ever, there have been multiple complaints from women accusing the company of causing ovarian cancer due to continued use of its talc.

In some cases, the ruling has been contrary to Johnson & Johnson’s, as in July 2018, when a court in Missouri ordered the company to compensate $4.690 million to 22 women and their families, who alleged that the asbestos contained in the talc for babies caused them ovarian cancer.

In May 2018 the company also lost a lawsuit against Joanne Anderson, diagnosed with mesothelioma (a type of cancer), and in August 2017 she was ordered to compensate Eva Echeverría, terminally ill for ovarian cancer.

Months before, in May of 2017, Johnson & Johnson’s had paid 110.5 million dollars to a woman from Virginia, also diagnosed with ovarian cancer, and had lost three more cases, for which she was fined with 72, 79 and 55 millions of dollars, that is, more than 315 million dollars.

The case against the company for its talcum powder for babies, does it honor its Credo and the Johnson & Johnson’s CSR? Can it be said that it has been responsible and has responded for his impacts before each of the audiences it considers to be a priority?

Apart from some media appearances by the CEO of Johnson & Johnson’s to talk about talc and newspaper displays to deny Reuters’ revelations, the company has lacked the capacity to respond to the situation it is facing.

Those who use their products, considered by the Johnson & Johnson’s Credo as «their first responsibility», want better answers than that. It’s enough to take a look at the comments to the message of Alex Gosky posted on social media.

I'm so glad I never used your crappy products w/my babies. Shame on you!

As response to the comments, the communities where they operate and to the «global community» with whom they claim to be responsible in their Credo, the company reports that «on the instructions of the global team they do not have the authorization to share any comments related to the topic of talc.»

Only on the day of the Reuters publication, December 14, Johnson & Johnson’s lost 10% of its value on Wall Street, registering its worst day on the stock market since 2002. Will the shareholders of the company think that this is responsibility towards them?

And inside, how are the collaborators living this episode? Will they continue to believe in the Credo and the Johnson & Johnson’s CSR? The answer they gave us in the areas of Communication and Social Responsibility of the company was the one already mentioned: no comment.

Will the Credo and Johnson & Johnson’s CSR, go from an inspiring case study to a case analyzed due to its bad corporate practices